GLIDE, Ore. - Deputies located the vehicle of two missing Douglas County men on Sunday evening around 4:00 pm.
At 10:26 am on Sunday, the Sheriff's Office was contacted by family members of the two men reporting them as missing. The men, 60 year-old Derwin Young of Roseburg and 66 year-old Charles Powell of Myrtle Creek, had been camping at White Creek campground and gone for a drive to the area of Emile Park off of Little River Road. When the pair did not return, family became concerned and contacted the Sheriff's Office.
Deputies and Search and Rescue volunteers were dispatched and combed the area looking for the two men. At about 4:00 pm, the 1997 Toyota Rav 4 the men were driving was located over an embankment along the river, within the footprint of Emile Park.
Crews from Glide Fire Department and Bay Cities Ambulance were dispatched to the scene. Powell was extricated from the vehicle by fire personnel. Young was pronounced deceased at the scene.
Powell was flown from the scene by Lifeflight to Sacred Heart Hospital at RiverBend where he remains in critical condition.
The crash is still under investigation, although alcohol does not appear to be a contributing factor. 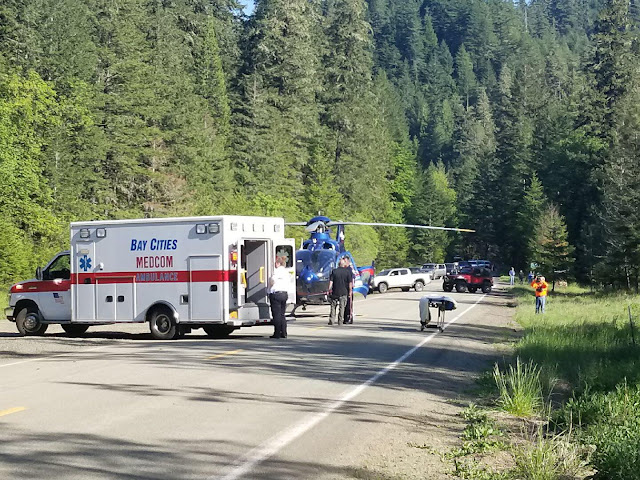