In December 2015, Medford Police Detectives initiated an investigation into a Sexual Assault involving a 12 year old female victim. There was limited information at the time of the initial investigation with the potential suspect known only as “Jax.”
In February of 2018, a Medford Police Detective learned the victim had discovered additional information regarding the suspect’s identity. The investigation revealed the victim had met a male on the social media application Meetme.com, when she was 12 years old. The victim and the male suspect, who identified himself as “Jaxson Campbell,” communicated via text messages for approximately one month before he convinced her to meet him at a location in Medford. During this initial meeting “Jaxson” made sexual advances toward the victim, however she begged him to stop. “Jaxson” convinced the victim to meet him a second time at the same location. During this meeting he sexually assaulted her. The victim told police the suspect arrived on a motorcycle both times they met.

During the investigation, it was discovered that an unrelated incident has been reported to the Jackson County Sheriff’s Department in 2015. In that case, a 14 year old female victim reported she had been sexually assaulted in White City, by a male she had met on Meetme.com. This suspect in this report had also identified himself as “Jackson Campbell” or “Jax Campbell.” The victim disclosed to investigators, the suspect had also convinced her to meet with him. At the time of their meeting the suspect also arrived on a motorcycle. A suspect was never developed in that case.
Detectives again interviewed the victim in the Jackson County case and were able to develop additional information that identified “Campbell” as 26 year old Timothy Diaz Jr., who is a Registered Sex Offender residing in Medford. Records indicate that Diaz also goes by the alias of “Jax.” At the time Diaz was identified as the suspect, it was also learned he had extraditable warrants out of Arizona for ten counts of Sexual Exploitation of a Minor.

The victim in the Medford Police case that originated in December of 2015, was able to identify Diaz as the male who had assaulted her over two years ago.
The victim in the Jackson County case disclosed to investigators that Diaz had also sexually assaulted her in Medford, in 2017.
Diaz was lodged at the Jackson County Jail on July 27, 2018 on charges of Rape 2, Sex Abuse 1, and two counts of Sex Abuse 2, for the assaults that occurred in Medford. Diaz was charged and indicted for additional crimes stemming from the 2015 Jackson County case, to include Rape 1.
Detectives are concerned there may be additional victims who have met “Jaxson Campbell,” “Jackson Campbell,” or “Jax” on Meetme.com or another social media application.
The Medford Police Department encourages anyone who may have additional information to contact the Criminal Investigation Division at 541-774-2230. 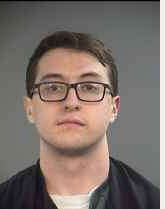