MYRTLE CREEK, Ore. - A Myrtle Creek Police Officer had responded to a report of a person throwing rocks into the road from the railroad tracks in the 2800-block of Dole Road at about 6:15 Thursday morning. At approximately 6:30 am, the officer made a radio call advising dispatchers that a shot had been fired. This gunshot was not made by the officer.

Multiple law enforcement officers from various jurisdictions responded to the scene. The shot was identified as coming from the area of 2865 Dole Road.

The Douglas County Sheriff's Office Tactical Response Team was activated and responded to the scene. Dole Road was shut down temporarily until the situation was under control. Three people were detained at the residence and questioned by investigators. No arrests have been made and detectives are currently focusing on the investigation. The incident is being investigated by the Douglas County Major Crimes Team.
No injuries were reported during the incident. 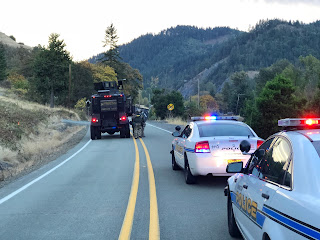