Suspect Arrested in Child Sex Abuse Case
On January 1, 2020, Jackson County Sheriff’s Office deputies arrested a suspect on sex abuse charges related to a victim who was babysat by his wife at their home in White City, Oregon.

The suspect is Marcial Palomares-Aguilar, 78 years old, of the 2700 block of Falcon St. White City, Oregon. He was lodged at Jackson County Jail on charges of Sex Abuse First Degree and Sex Abuse Third Degree. He was arrested at his home. Palomares-Aguilar is being held on $255,000 bail.

Anyone who may have further information about this investigation is asked to contact Detective Steve Bohn at the Jackson County Sheriff’s Office Tip Line 541-774-8333. 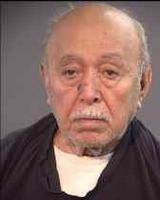