On April 12, 2020, at about 5:00 a.m., deputies responded to a disturbance occurring in the 5000 block of Rice Creek Road in Winston.  A male subject reported he had an altercation with Sabre Eddings, age 65 of Winston.  During the incident, the male was stabbed on the forearm by Eddings.

Eddings had locked himself in his trailer prior to deputies arriving.  He refused to come out of the trailer and threatened to blow up the trailer with propane if deputies approached.

The Sheriff's Office Crisis Negotiations Team responded to the scene and began talking to Eddings.  After several hours, Eddings came out of his trailer and was taken into custody without further incident.  He was lodged in the county jail on Second Degree Assault, Menacing and Unlawful Use of a Weapon charges. 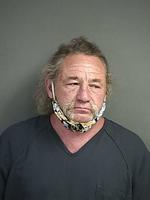