Investigation Underway After Man Injured During Shooting in South Bend


On April 4th, 2020 at approximately 9:00PM, Deschutes County 911 received a call from the area of mile post 1 on Cottonwood Rd between Highway 97 and Sunriver. The caller reported a shooting with injuries.

Since this is an active and developing investigation, limited information is being released at this time. Additional information will be released as it becomes available.

Cottonwood Rd and the highway ramps have been reopened in all directions. 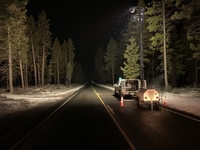