On April 9, 2020 at approximately 1000AM, a Deschutes County Sheriff’s Office Deputy was monitoring traffic at the intersection of Highway 97 and State Recreation Rd in the La Pine area. At the same time, a silver Dodge pick-up driving east on State Recreation Rd, crossed over the highway at a high rate speed without stopping at the posted stop sign. The Dodge driven by Emma Pickett, narrowly avoided a collision with southbound highway traffic and continued east onto USFS Rd 9735.

After watching this, a DCSO Deputy attempted to conduct  traffic stop with Pickett as she sped away on USFS Rd 9735. A pursuit was initiated and the Deputy pursued Pickett for 6 miles into the forest before her truck became disabled in the snow on USFS 9735. Speeds ranged between 35-55 mph and no other traffic was present.

Pickett was taken into custody without incident at the scene. During her arrest, DCSO Deputies located user amount of methamphetamine and a large dagger.

Pickett was cited, in lieu of custody, for the charges stated above and released on her own recognizance.

Charges:      Attempt to Elude by Vehicle
Reckless Driving
Felon in Possession of a Prohibited Weapon
Possession of Methamphetamine 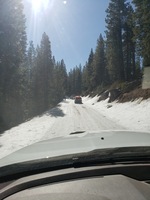