Prolific Car Thief in Custody After Trying to Elude Deputies


DRAIN, Ore. - A prolific car thief is lodged in the Douglas County Jail this evening after stealing a vehicle and attempting to elude deputies early Wednesday morning.

40-year-old Thomas Ivan Grimes of Eugene was observed by a Douglas County Sheriff's Office deputy at 1:54 am, Wednesday morning driving a 2004 GMC Sierra Pickup on Goodrich Highway near John Long Road in Rice Hill. The vehicle had previously been reported as stolen to the Roseburg Police Department.

The deputy attempted to conduct a traffic stop on the stolen vehicle, at which point Grimes attempted to elude them. Grimes eventually crashed the vehicle in 7000-block of Eagle Valley Road and ran from the scene.

Deputies identified a residence where Grimes had run to hide and surrounded it. Shortly after 9:00 am, Grimes surrendered and was taken into custody.
He was lodged at the Douglas County Jail on the following charges:
Douglas County Deputies have linked Grimes to eight additional stolen vehicles and three elude cases between Douglas and Lane Counties in the last week.

Additional charges related to those cases are pending. 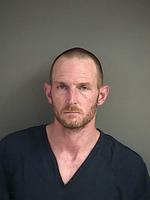