At 11:25 p.m. on April 12, 2020, Roseburg Fire Department was dispatched to a residential structure fire at 2462 W. Jay Avenue.  An individual residing at the home reported the fire to dispatch and noted that other residents were still inside the structure.  Dispatch then received notice that all residents were able to evacuate the structure.

Firefighters arrived on scene to find heavy fire and smoke coming from the front and rear portions of the structure.  Firefighters made an interior attack to extinguish the fire, conducted a primary and secondary search, and completed overhaul.  Five adult residents and two dogs were displaced due to the fire.  Umpqua Valley Ambulance transported two adults from the residence to Mercy Medical Center.

The residence sustained structural and water damage.  The home is no longer habitable.  Fire investigators were on scene and the cause of the fire is still under investigation.

The Roseburg Fire Department would like to remind everyone of the importance of working smoke alarms and ensuring you have the appropriate number of smoke alarms installed in the home.

Remember to make sure you have working smoke alarms on every level of your home, outside each sleeping area and in every bedroom.  Roseburg Fire Department recommends that homeowners consider a home fire sprinkler system for increased protection. 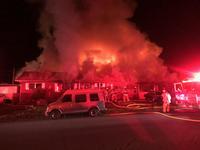