Theft Investigation leads to the arrest of Corvallis man, Yachats, Or.

On 04/12/2020 at about 2:42 PM, Lincoln County Sheriff's Office Deputies responded to the report of Suspicious Activity/Theft at a residence off of the Yachats Ocean Road located in Yachats, Oregon. The report indicated that an unknown adult male was trespassing at the private residence, stealing exterior furniture in the process.

Deputies located Patrick C. Hummel, 42 year old Corvallis resident, hiding in a wooded area adjacent to the residence, Hummel resisted arrest as he was taken into custody on multiple charges. Hummel was evaluated by medical responders after which he was transported to the Lincoln County Jail on the following charges:

In addition, Hummel had an active Felony Warrant issued for his arrest out of Benton County, Oregon. 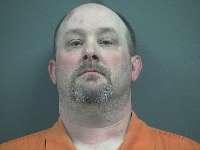