At 9:00 p.m. on April 30 2020, Roseburg Fire Department was dispatched to a residential garage fire at 663 NE Nash Street.  Neighbors reported a garage on fire next to the residence.

Firefighters arrived on scene to find heavy smoke and fire coming from the front of the structure.  The structure was set back from the street and down a short driveway.  Firefighters initially made an exterior attack and moved to the interior for extinguishment and overhaul.   Firefighters conducted a primary search and determined the garage was unoccupied.  Quick extinguishment of the fire stopped the spread to nearby residential structures.

The garage sustained structural and water damage.  Fire investigators were on scene and the cause of the fire is still under investigation. 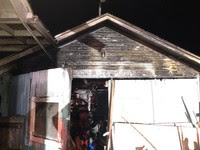