An off-duty firefighter was the first to call 911 at 11:35 am on September 4 to report dark grey smoke coming from the windows of a home in the 600-block of SE 68th Ave in Hillsboro. Hearing smoke alarms alerting from inside the residence, the firefighter tried to make contact with the residents at the front door with no response. Within four minutes, Engine 6 from Cherry Lane station arrived to find smoke coming from an attic vent and initiated entry to attack the fire. Moments later, Engine 2 arrived and crews confirmed a working a fire. The incident was upgraded to a first alarm to bring additional units to the scene.

Engine 3 arrived to assist with fighting the fire and Engine 2 transitioned to a search of the home. Firefighters from Truck 5 advanced to the roof to create ventilation to release heated gas and smoke from the home and assist in the firefighting efforts. Upon the search of the home, firefighters located eight pets inside. Firefighters attempted resuscitation efforts and transported one dog and one cat to a local animal hospital for medical care. Sadly, six pets were fatally injured. No residents were found home at the time of the fire.

After the fire was controlled, firefighters spent additional time to assist with clearing smoke and salvaging some of the residents’ belongings. A fire chaplain responded to the scene to assist with spiritual care for the residents and the trauma of experiencing a home fire and losing their family pets. American Red Cross was called to provide victim assistance. Six adult residents were displaced as a result of the fire.

A Hillsboro Fire investigator responded to the incident and the fire remains under investigation. No cause has been determined. 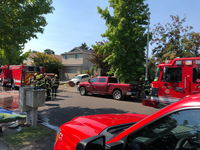