IDLEYLD PARK, Ore. - Search and Rescue crews resumed their search this morning for the Idleyld Park man who was reported missing on Sunday evening. At approximately 11:30 am, 911 dispatchers received a report that hunters had located the missing individual, Jack Allen Lawrence, in the mountains outside of Glide near Emile Shelter. The hunters reported they had given Lawrence some food and water before driving to cell service to request help. Once notified, searchers were able to arrive at the location within a short time.

Deputies learned that Lawrence had gotten his 1990 Toyota pickup high centered on a downed tree on Friday evening (09/04/2020). Lawrence had gotten out of his vehicle, but had fallen approximately 50' over an embankment. Rescue crews were able to extricate Lawrence back to the roadway where he received treatment by EMS. Lawrence was in good condition, but transported by ambulance to Mercy Medical Center for evaluation. Lawrence's dog, "Trigger" was located unharmed and in good condition in the pickup.

The Sheriff's Office and the family of Mr. Lawrence wish to express their thanks to everyone who assisted in locating him. The hunters who located him stated they had learned of the search when they had been contacted earlier in the day by Search and Rescue Crews. 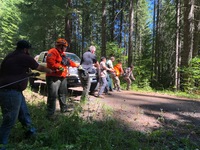