Just after 8:45 am this morning, several Oregon City Police Department Officers responded to the 15900 block of Moss Lake Way in Oregon City after a neighborhood resident called to report a suspicious vehicle that showed up overnight.  A Gladstone Police Department K-9 Handler also responded to assist after Officers learned the license plate displayed on the vehicle was previously reported as stolen.

Officers attempted to contact the driver of the vehicle, but he fled through the neighborhood.  During the brief encounter, the driver, identified as Craig McCarthy, intentionally rammed his vehicle into a marked police car and shots were fired by Officers.  Mr. McCarthy was subsequently taken into custody by Oregon City Officers and the Gladstone Police K-9 after a short foot chase.  He was taken to a hospital and treated for injuries stemming from the K-9 and vehicle crash.  One Officer was also transported to the hospital for non-life-threatening injuries sustained during the crash.  Several of the involved Officers have been placed on administrative leave, which is standard practice.

Mr. McCarthy is currently lodged at the Clackamas County Jail on the following charges:

ORS 811.705 – Failure to Perform Duties of Driver to Injured Persons

The Clackamas County Major Crimes Team is investigating the incident, and the investigation is ongoing.  Anyone with information regarding the incident is asked to contact the OCPD tip line at 503-496-1616. Reference OCPD case #20-019044 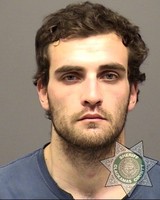