Bend Police responded to a single vehicle roll over crash around 12:12 p.m. on NE 27th Street near the entrance to Mountain View High School.  It was determined the driver lost control of his Lexus and it rolled several times before coming to rest, upside down. The driver was treated and released at the scene by medics. Through investigation, it was determined he was not under the influence of drugs or alcohol.  The driver was issued a citation for careless driving.  The northbound traffic on NE 27th Street diverted into the continuous left center turn lane for about an hour. 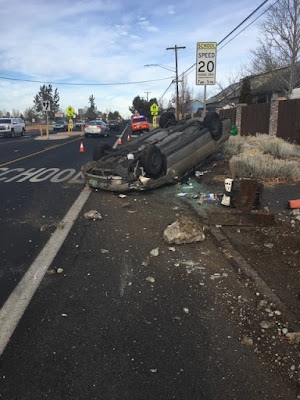