On Saturday, December 19, 2020, at 1:50 a.m., Washington County Sheriff’s Office deputies responded to a head-on crash at SW Farmington Rd. and SW Riggs Rd. A 2013 Subaru Impreza was on fire after it crossed the center line and crashed head-on into a 2019 Dodge Caravan.

The woman driving the van had just finished her shift as a nurse and was able to get out of her van. She realized the Subaru was on fire and the driver was still trapped inside. She was able to flag down other people and together they pulled the man out of the burning car and away from the flames.

Deputies arrived along with emergency medical crews but that driver, 24-year-old Dagoberto Flores Ramirez of Cornelius, was pronounced dead at the scene. Mr. Flores Ramirez’s family was notified of his death.

The interagency Washington County Crash Analysis Reconstruction Team (CART) responded to the scene. The investigation showed Mr. Flores Ramirez was driving the Subaru and crossed over the centerline where he hit the Dodge head-on. 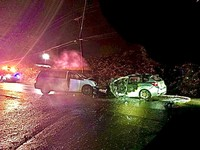