On December 30, 2020, the Jackson County Grand Jury convened to consider whether the Jackson County Sheriff’s Office deputy was justified in his use of lethal force against Anthony James Hales and whether there was sufficient evidence to return an indictment on the criminal charges against Anthony James Hales (DOB:   12/3/1995).  The incident occurred on   December 2, 2020, in the 2500 block of Agate Meadows in White City at approximately 7:59 pm.

The Grand Jury was asked to consider two separate issues.  First, whether the actions of the involved deputy were justified as lawful use of force.  Oregon law provides a police officer may use deadly physical force against another person if the officer reasonably believes a person is about to use deadly physical force against the officer or another person, or it the officer’s life or personal safety is endangered in the particular circumstances. (ORS 161.239)   The second issue for the Grand Jury was whether there was sufficient evidence to hold over the suspect on the submitted criminal charges.  In order for the Grand Jury to return an indictment they must determine there was sufficient evidence, taken together if unexplained or uncontradicted, for a trial jury to convict.

Deputy Trevor Waldeyer has been employed by the Jackson County Sheriff’s Office since April 2018.  He had prior law enforcement experience with the Rogue River Police Department.  His current assignment is patrol.

Testimony and Evidence Presented to the Grand Jury:

Jackson County Sheriff’s Deputy Waldeyer was responding to 2527 Agate Meadows in White City for a parking violation.  There was a large gathering occurring at the residence.  Deputy Waldeyer approached the front door, dressed in his Sheriff uniform, and knocked.  He could hear arguing inside and when his knock went unanswered, he rang the doorbell.   At 19:58 the door quickly opened.  A male subject wearing a red sweatshirt, red pants and black body armor opens the door.  That subject was identified as Anthony James Hale.  He was holding a black rifle in his left hand with his back to Deputy Waldeyer who was standing outside.  Anthony Hales then spun to his right, facing a second male, and brought the rifle up from his left side.  Anthony Hales then grabbed the grip of the rifle with his right hand and began moving the rifle toward the second male.  The second male, later identified as Robert Hansen, grabbed onto the barrel of the rifle and both males began struggling over the rifle. Deputy Waldeyer stepped to his right and began yelling, “whoa, whoa, whoa, whoa, stop, stop!”.  Deputy Waldeyer then fired one shot.  Because Anthony Hale was wearing body armor, Deputy Waldeyer fired at Anthony Hales’ pelvis.  The shot ended up striking Robert Hansen in the lower leg.  From the time of the door opening, to Deputy Waldeyer reporting on the radio that shots had been fired, was 13 seconds.

Deputy Waldeyer testified that he feared for his own life and also the life of Robert Hansen and other people in the house.  Deputy Waldeyer said he immediately realized that the weapon that Anthony Hales had was a high -powered, high capacity rifle.  Deputy Waldeyer also didn’t believe his police vest would protect him from the high capacity rifle.  There were no positions of cover on the front porch of the residence.  After the shot was fired, Deputy Waldeyer moved to a position of cover behind a vehicle in the driveway and began giving commands.  Anthony Hales eventually placed the rifle down in the front yard and followed commands until additional deputies arrived to assist.

A search warrant was executed at the residence.  The rifle is an Anderson Manufacturing AM-15 rifle with an optic, it was loaded with 29 rounds in the magazine, but did not have a round chambered when it was recovered.

Police learned from the investigation that the weapons and body armor were brought to the residence on that date to film a rap music video.  Robert Hansen was treated at the hospital for a gun shot wound and released.  Robert Hansen testified he resides at the residence with some roommates.  On this date, he drank some alcohol and did not recall what occurred.  He remembered standing in the doorway but did not recall struggling with the rifle that Anthony James Hale was holding.

Jackson County requires a grand jury make the determination as to whether the officer’s use of force was justified under Oregon law.  The Grand Jury determined the involved officer, Deputy Waldeyer, was fully justified in his use of lethal force and in compliance with Oregon law.  This case was presented to the Grand Jury by District Attorney Beth Heckert and Senior Deputy District Attorney Alyssa Claseman.  The Grand Jury also returned an indictment against Anthony James Hales on two charges, Unlawful Use of a Weapon and Menacing.  The case is being prosecuted by Senior Deputy District Attorney Alyssa Claseman.  No court appearance has been set for Anthony James Hales.

Because Anthony Hales has been indicted, no further evidence or information will be released, pending the resolution of the criminal case. 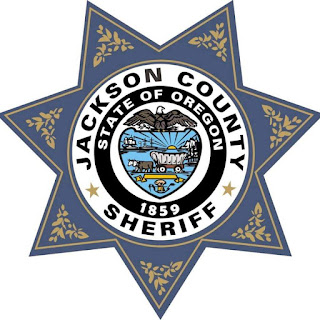