On Thursday, January 7, 2021, at 1:25 a.m., Washington County Sheriff's Office deputies responded to a robbery near the 100 block of SW 138th Avenue in Beaverton, Oregon. When deputies arrived, they discovered the victim had been stabbed several times in the upper body and face by an unknown male.

The victim told deputies he had just arrived home and met his friend outside, 25-year-old Katherine Garrido. As the victim was unlocking his front door, a man ran up to the victim and demanded his wallet. When the victim explained he didn't have a wallet, the man began stabbing him in the upper body and face, then ran off on foot.

The victim was transported to a local hospital where he was treated for his injuries and later released.

Ms. Garrido told deputies she witnessed the attack and gave a brief statement, then left the scene on foot.

Deputies were able to view video surveillance footage from the victim's home that captured the incident.

Shortly before 3:30 a.m., deputies located a 2009 Hyundai Sonata registered to Ms. Garrido traveling eastbound on Highway 26. After observing multiple traffic violations, deputies stopped the vehicle on Highway 26, near SW Cedar Hills Blvd. As deputies approached the vehicle, they recognized the male driver, 25-year-old Stephen Jajeh, as the robbery suspect from the surveillance video. Ms. Garrido was also in the vehicle. Mr. Jajeh and Ms. Garrido were both arrested.

Deputies searched the vehicle and found a knife with blood on it located in the trunk.

Mr. Jajeh was arrested for robbery in the first degree, assault in the second degree, and unlawful use of a weapon.

Ms. Garrido was arrested for robbery in the first degree, assault in the second degree, criminal conspiracy, and unlawful use of a weapon.

Both Ms. Garrido and Mr. Jajeh were lodged in the Washington County Jail.

***The surveillance video is not releasable to the media or the public.*** 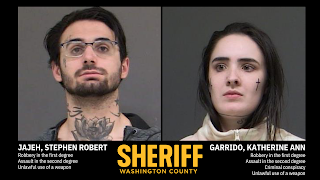