DOUGLAS COUNTY, Ore. - Sheriff John Hanlin was sworn into office for his fourth term on Monday, January 4, 2021, at the Douglas County Courthouse.

Sheriff Hanlin was first elected to office in 2008 after the previously elected Sheriff, Chris Brown, accepted a position with another agency. Hanlin assumed office in January 2009 as the County's 48th Sheriff. At the end of his first term, Sheriff Hanlin ran unopposed and was re-elected in 2012, 2016 and again in 2020.

Retired Sheriff Ira Byrd currently holds the honor of longest serving Sheriff. Sheriff Byrd was initially appointed as Sheriff in 1955 and was later elected two more times. He retired after serving for 12 years and 6 months in the position from April 1955-October 1967. Retired Sheriff John Pardon also served an impressive 12 years from January 1989 until his retirement January 2001. John Hanlin was hired as a deputy under Sheriff Pardon’s administration.

Sheriff Hanlin stated he is humbled to hold the office. "During my tenure as Sheriff there have certainly been some difficult and challenging times, but there has also been many gratifying and fulfilling accomplishments," he said. "I am both deeply grateful and honored to serve as your Sheriff for another term". Sheriff Hanlin also noted he is most thankful for the support of the community that law enforcement receives in Douglas County.

Sheriff John Hanlin is a native Douglas County resident, born and raised in the Roseburg area. Hanlin graduated from Glide High School in 1980. Following graduation, he worked for the Douglas Forest Protective Association and attended Umpqua Community College. In 1983, he moved to Bend, Oregon, where he attended Central Oregon College. In 1986, he earned an A.S. Degree in Computer Information Systems and returned to Douglas County.

Upon his return to Douglas County, Hanlin continued his employment with Douglas Forest Protective Association as a Forest Officer, before being hired by the Douglas County Sheriff's Office in 1989.

During his tenure at DCSO, he has served as a Patrol Deputy in the South County and Roseburg Patrol Offices, as a Street Crimes Unit Investigator and as a narcotics detective. Hanlin was also an active member of the Sheriff's Office Tactical Response Team (TRT) for more than 12 years. In April of 2001, he was assigned to the position of Commander of the Douglas Interagency Narcotics Team (DINT). In August of 2005, he was promoted to Lieutenant and assigned to command the Douglas County Sheriff's Office Detectives Division, a position he held until being elected to the Office of Sheriff. 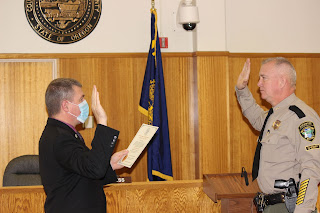 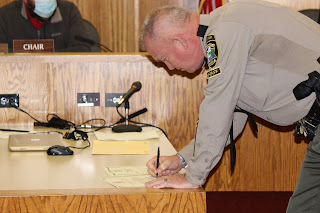