The Lane County Sheriff's Office is seeking the public's assistance identifying and locating a suspect in a robbery.  On December 24, 2020 at approximately 3:30 a.m., the Lane County Sheriff's Office received a report of a robbery at the AMPM market on River Road and Azalea Drive in Eugene.  The suspect reportedly entered the market and presented a note to the cashier, then left on foot with an undisclosed amount of cash.

The suspect is described as a white male approximately 30-40 years old with a medium build, and is estimated to be between 5'06" and 6'00" tall. At the time of the robbery he was wearing a black jacket over a gray hooded sweatshirt, gray pants, and black shoes with red and white accents, pictured.  The suspect wore a hood over his head and a face mask, but he had dark colored eyebrows.

If you know the identity or location of the suspect described above please contact Detective Greg Jones with the Lane County Sheriff's Office at 541-682-2342, or call 541-682-4150 then press 1.  Do not attempt to contact or apprehend the suspect. 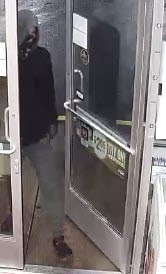 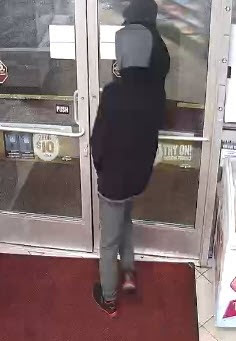