Preliminary Investigation revealed a Ford Fusion, operated by Jordan Chandler (26) of Salem, was southbound when it drove into the northbound lane and collided with a Cherriots mini bus operated by Rachel Bunting (51) of Salem.

Bunting was transported to the Salem Hospital where she was pronounced deceased.

There were three passengers on the bus all transported to the Salem Hospital:

Passenger in the Ford, Brooke Fisher (21) of Salem, was transported to Emmanuel Hospital in Portland.

OSP was assisted by Woodburn Fire Department, EMS, and ODOT. 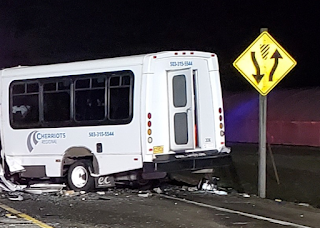