On Saturday, February 6, 2021, around 2:45 a.m., the Gresham Fire Department responded to a house fire in the 100 block of Maple Blvd. in Wood Village. Multiple callers reported seeing flames burning through the home’s roof. When firefighters arrived, they established a perimeter and began an initial attack. At approximately 4:15 a.m., Gresham Fire reported the fire was out. Firefighters performed an initial search of the home. During a secondary search, firefighters located a body inside the home. Multnomah County Sheriff’s deputies were called to the scene and confirmed the fatality.

Detectives determined the deceased is an adult male.

The death investigation is ongoing, and no further details can be released at this time. 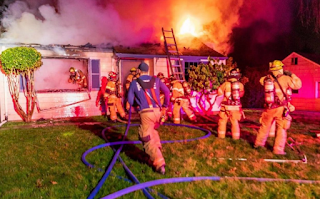