On February 2, 2021, at about 0901 hours, the Grants Pass Department of Public Safety (GPDPS) received a report of a robbery in the parking lot of Umpqua Bank, located at 117 NE F Street.

It was reported the suspect, a white male pushed the victim and stole money from the victim's hand.  The suspect then fled the scene.  No one was injured and no weapons were brandished.

GPDPS police officers and other Department personnel responded to the scene and searched for the suspect.  Members of the public called in tips, each of which was responded to by officers.  The suspect was not located during the initial search.  A bank camera captured the suspect on video.

This case is still under investigation.

Anyone who may have witnessed the incident, can identify the suspect, or has information relative to the investigation is encouraged to contact Officer Kasen Perkins of GPDPS at 541-450-6260.  Please do not approach the suspect if you observe him; call GPDPS and report his location. 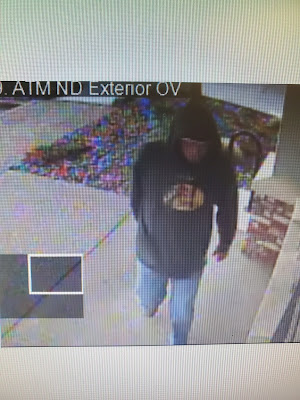