Lincoln County Sheriff’s Office Search and Rescue has suspended the operation to locate and rescue Adrian Alonzo Smith.  Search and Rescue crews searched the area extensively and have been unable to locate Smith.  Despite snow, rain, and wind, SAR teams covered an on-the-ground distance of 483 miles within a primary search area of about eight square miles.  Drones, K9s, and forensic cellphone analysis were also unable to shed light on Smith’s whereabouts.

A tip from the public on January 26th reported a location where Smith was seen several days before.  The reporter indicated Smith was shirtless in the cold weather, which is a common symptom of severe hypothermia.  Smith’s encampment was located on the afternoon of January 30th near where he was reported to have been seen.  Food, water, and other supplies appeared to have been untouched since before the recent snowfall began in the area on January 26th.  The evidence, weather, and condition of Smith’s camp led investigators to believe the probability of Smith’s survival is too low to continue sustained operations.

Investigators are waiting on better weather conditions to continue search and recovery operations.  A definite timeline has not been set, but efforts will likely resume within two weeks.  Anyone with information is still encouraged to contact Sr. Dep. Bruce McGuire at (541) 270-3400 or LCSO Dispatch at (541) 265-0777.

The Lincoln County Sheriff's Office is seeking information related to the disappearance of Adrian Alonzo Smith.  Adrian Smith is a 49 year-old male who was last seen on Tuesday, January 19th, 2021, when friend dropped him off at the Drift Creek Falls Trailhead. Adrian missed his scheduled pickup the following day and LCSO Search and Rescue was notified.  Multple areas were searched over several operational periods, but Adrian could not be located.

There has been a high level of hiking activity in and around the Drift Creek Falls area.  It is likely that someone has had contact with Adrian, particularly around the 19th or 20th of January.  Adrian is about 6 feet tall, 170 pounds, with shoulder-length brown hair.  He has numerous tattoos on his upper body; most notably a large pair of wings on his back.

Anyone with information regarding Adrian Smith's whereabouts is asked to contact Senior Deputy Bruce McGuire at 541-270-3400 or Lincoln County Dispatch at 541-265-0777. 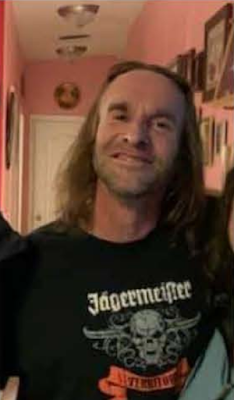