Two paramedics and an impaired driver went to the hospital with injuries after a serious crash.On Saturday, March 6, 2021 at 12:42a.m., East and Central Precinct officers responded to an emergency signal from an American Medical Response (AMR) ambulance at East Burnside Street and Northeast Cesar E. Chavez Boulevard. Officers arrived and found the ambulance had been involved in a crash (photo). The driver and passenger paramedics were conscious but hurt. They were transported by ambulances to the hospital for non-life threatening injuries. The driver of a 2008 Subaru Legacy Outback sedan was pinned in the vehicle and unconscious. Portland Fire and Rescue extricated the driver and he was transported to the hospital with serious injuries.Officers conducted an investigation and determined the ambulance was driving eastbound on East Burnside Street when it was struck by the northbound Subaru. The ambulance was not responding to an emergency call and its lights/siren were not activated. There was no patient in the ambulance at the time.The driver of the Subaru, Lacorius M. Jenkins, 18, was issued a criminal citation at the hospital for Driving Under the Influence of Intoxicants and Reckless Driving. 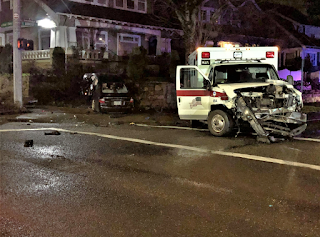