On February 28th, 2021 at about 1905 Hours, The Grants Pass Department of Public Safety (GPDPS) 911 agency began fielding calls of a male subject lighting the gas pumps on fire at the Pacific Pride, located at 505 Rogue River Hwy. At approximately the same time, an alarm call came in at 85 Fruitdale Dr., which is the Industrial Source Welding Supply and in close proximity to the gas pumps. GPDPS Police and Fire/Rescue units responded to each scene. Dispatch began to provide updates from callers, of a male subject who was responsible for both the fire at Pacific Pride and what was determined to be a burglary at the welding supply. This male subject had used a gas pump to spray fuel into the air and directly onto the pumps. The gas pump had been taken from a citizen's vehicle who had been filling her tank. He then tried to start a fire numerous times, until he was successful. The male subject then ran to the welding supply and shattered the front glass door to make unlawful entry to the business.

With the help of witness statements, the male subject was located and placed in custody without incident, near the intersection of Fruitdale Dr. and Williams Hwy. He was identified as 44 year-old, Joshua Lee Leach who is transient but has a listed address in Pennsylvania. GPDPS Fire/Rescue was able to extinguish the fire quickly at Pacific Pride and prevented what could have been a large explosion. Businesses that were nearby were evacuated for precautionary measures by Police units, until the scene was safe. The GPDPS Fire Marshal responded and assisted at the scene of the fire. The location was made safe and is not a danger to the public. Damage appears to be limited to one island at the fueling station.

Police units investigated both scenes and were able to get witness statements and video footage of the incidents. When the investigations were completed, Leach was lodged at the Josephine County Jail on the charges listed below.

2. Burglary in the Second Degree

3. Criminal Mischief in the First Degree

5. Unlawful Entry to a Motor Vehicle

We extend our thanks to the citizens who observed the suspect and remained in the area to talk with officers and assist with the investigation of this case.  Luckily there were no injuries and as a result of the rapid response of police and fire units, the fire was contained and the suspect was stopped before he created more hazards and citizens were injured.

The Grants Pass Department of Public Safety asks any witnesses to these incidents to please call (541) 450-6260 and reference Case # 2021-9229. We would also like to thank anyone who was inconvenienced during this alarming event for their patience. Witnesses in the area were crucial in assisting with the identification and ultimate capture of the suspect. 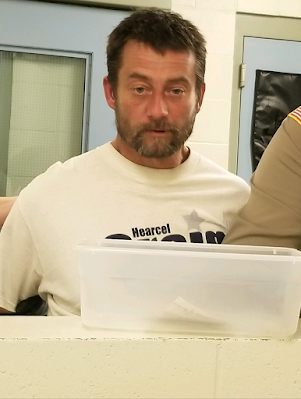