Just after 7:00pm this evening, a community member found Darrell Love in the forested area to the east of Darlene Way, near La Pine.  Love was evaluated by La Pine Fire for cold exposure, then reunited with family.

The Sheriff's Office greatly appreciates everyone that called in tips and assisted with locating Mr. Love today.

On 03/06/21, at about 9:40am, John Love contacted 9-1-1 Dispatch to report his son, Darrell Ray Love, as missing.  John and Darrell live in separate trailers near one another on BLM land, near Darlene Rd and Forest Service Rd 2205, in La Pine, OR.  John last saw Darrell on 03/05/21, at approximately 4:00pm, as Darrell was walking from John's trailer back to his own trailer.  John described Darrell as a white male adult, 6' tall, about 180 lbs, short brownish-gray hair and beard, with blue eyes.  Darrell was last seen wearing a gray hoodie sweatshirt, blue jeans and gray tennis shoes.

It is unknown whether Darrell walked away from his trailer later or if he was picked up by someone else.  One of Darrell's pitbull dogs has been missing for a few days and it's possible Darrell left to look for it.  John reports it is unusual for Darrell to have been away from his trailer for this length of time.  Darrell does not own a cell phone.

DCSO Patrol and Search and Rescue Deputies, as well as US Forest Service Law Enforcement Officers responded and searched the surrounding area (including Darrell's trailer), but have not been able to locate him as of this time.  Early morning snow showers covered any potential tracks left by Darrell.  DCSO Deputies deployed their drone to search above surrounding roads and treed areas without success.  Other transient camps in the surrounding area were canvassed, but no one has reported seeing Darrell.  A DCSO K9 is enroute to assist with the search.

Anyone who has seen Darrell in the last 24 hours or knows of his whereabouts, is encouraged to contacted DCSO through the non-emergency dispatch line:  541-693-6911. 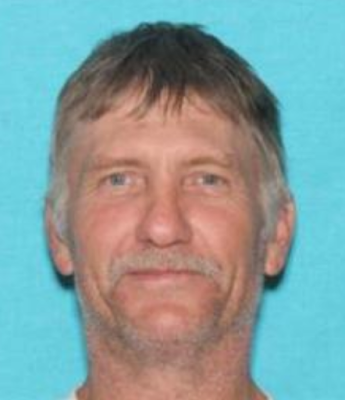