DOUGLAS COUNTY, Ore. - On Friday, February 26, 2021, Deputies with the Douglas County Sheriff’s Office served search warrants in Elkton and Cottage Grove, Oregon, in regard to a five-month long investigation into a fraudulent non-profit organization ran by an individual using the alias of “John P Hope.” During the course of the investigation, “Hope” was identified as 40 year-old Tyrone Curtis Powell. Powell was arrested during the execution of the search warrants.

In the later months of 2020, deputies began an investigation into the suspected fraudulent transaction of privately-owned property to a foundation called the “Impossible Roads Foundation,” which was ran by Powell. The victim in the transaction was elderly and under the impression the foundation was a legitimate non-profit organization that built tiny-homes for disabled veterans. The victim originally had agreed to donate approximately 3 acres to the foundation, believing it was legitimate, but during the transaction Powell actually obtained approximately 30.8 acres and a shop. Powell immediately began assuming the shop and property as his own property after the transaction.

After the transaction for the property, Powell obtained Restraining Orders against the victim and filed criminal reports accusing the victim of other crimes, such as burglary and theft. Powell filed these reports and court documents using the alias of “John Hope.”

Deputies initially investigated “Hope’s” identity and learned that his actual name was Tyrone Curtis Powell. During this portion of the investigation, deputies learned Powell had been raised in California, attended Yale University and resided in Arizona, where he became involved in fraudulent activity. Also, during this time, Powell operated separate/unrelated fraudulent non-profit organizations under the names of “The Missing Piece Foundation,” “True Story World,” “The Missing Piece Foundation Endowment,” “Machine Seven Super Car Tour,” and “Love.”

While in Arizona, Powell’s fraudulent activity began to catch up with him in both criminal and civil proceedings. In 2009, Powell was arrested for altering a VIN on a vehicle in which he had obtained a loan, then reported stolen and removed the VIN and license plate. Powell also became involved in civil litigation for defaulting on loans. Powell made claims to law enforcement that he was a victim of identity theft resulting in hundreds of thousand dollars in loss. In approximately 2010 an obituary for Powell was printed in the local newspaper. A couple years later Powell fled Arizona.

Powell is believed to have traveled to Alaska, initially, and then shortly there after to Bellingham, Washington. Once in Bellingham, Powell assumed the identity of “John Hope.” Powell was able to illegally obtain a Washington Identification card and Social Security card under the new alias with his fraudulent story.

While in Bellingham, Powell again started another fraudulent non-profit organization, Impossible Roads Foundation. Under this fraudulent organization, Powell claimed to build tiny homes for disabled veterans. Powell obtained large donations from companies such as Home Depot and Matson, as well as others.

In January of 2021, deputies traveled to Bellingham, Washington. While in Bellingham deputies interviewed multiple individuals, who were familiar with Powell, who knew him as “John Hope.”

While in Bellingham, deputies also investigated the Impossible Roads Foundation and its claims of building tiny homes. Through the investigation, deputies learned the majority of the donated items were not being utilized and were essentially abandoned. Furthermore, it was learned the majority of shipping containers, which were donated under the pretenses they were to be used as the tiny home structures, had been sold to a company or individuals.

Deputies also investigated some of Powell’s history in Arizona and were able to contact an individual who was able to provide detailed history on Powell’s behavior and sudden disappearance from Arizona.

Based on the information learned in the investigation, Deputies applied for and were granted search warrants for Powell’s hotel room in Cottage Grove as well as the shop in Elkton, Oregon. Powell was arrested and lodged at the Douglas County Jail on the following charges:

The Sheriff’s Office is asking anyone with information in regards to this investigation or Powell, please contact the Douglas County Sheriff’s Office at dcso.pio@co.douglas.or.us or through the tip line at 541-957-2099. 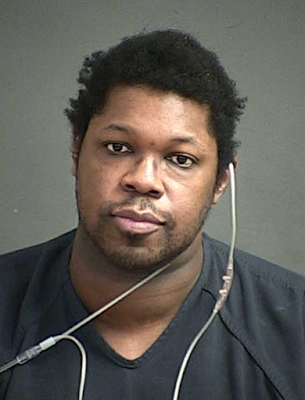