Portland Police Arson Unit is investigating a possible explosive device detonation that caused damage to a recreational vehicle in the Argay Terrace Neighborhood.On Saturday, March 6, 2021 at 8:41a.m. Portland Police were dispatched to assist Portland Fire and Rescue on a report of a trailer on fire in the 3800 block of Northeast 141st Drive. When they arrived they found smoke coming from a RV parked there (photo). Firefighters found smoke but no fire, and determined that no one had been injured.An initial investigation indicated that an explosion had happened outside the RV, and that it was suspicious in nature. It was believed to be an explosive device. It's unknown if the RV was occupied at the time.Portland Police and Portland Fire Arson Investigators are requesting information from the public about this incident, and any other recent explosions in the neighborhood. None have been confirmed by investigators. If anyone has information, they're asked to contact Detective Meredith Hopper at Meredith.Hopper@portlandoregon.gov 503-823-3408. Please reference case number 21-60290. 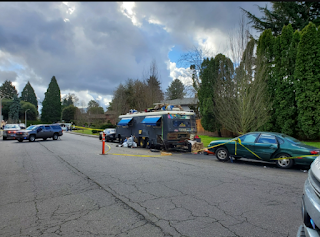