On Thursday, April 15, 2021, at approximately 2:46 a.m., Multnomah County Sheriff’s Office patrol deputies responded to a report of a shooting at the Motel 6 in Troutdale. When deputies arrived, they located the victim, an adult male, with gunshot wounds. Deputies also found evidence of gunfire. The victim was transported to the hospital by ambulance with non-life-threatening injuries. The suspect, also an adult male, left the motel prior to the arrival of deputies. Law enforcement officers from multiple agencies searched the area, but the suspect was not located. At this time, no arrests have been made.

During the investigation, detectives learned that prior to the shooting the suspect and victim engaged in an argument. The two men did not know each other.

Because this was an isolated case, deputies do not believe the public is in any danger. The investigation is ongoing, and no further comment will be made at this time. 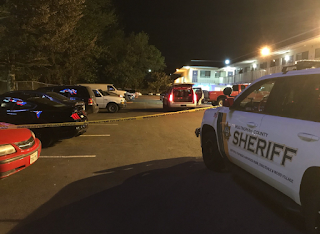