On 04/20/2021, at 1024 hours, the Coos Bay Police Department dispatch center received a 911 call reporting a vehicle struck a person in the public parking lot on the southeast side of the intersection at Commercial Ave. and N. 3rd St.  Medical personnel and law enforcement were dispatched to the scene.

Officers arrived on scene at approximately 1027 hours.  The victim, 20-year-old Raven English, was pronounced dead at the scene.  The driver of the vehicle remained on scene and cooperated with the investigation.  Witnesses told officers that English had been laying in the parking lot and had been encouraged to move a short time before the incident.  The driver of the vehicle said they had not seen English and drove over her.

The driver, who was traumatized from the incident, was later transported to Bay Area Hospital.

The crash was investigated by the Coos Bay Police Department. 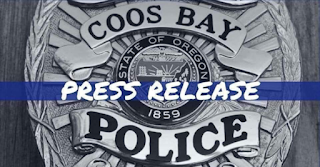