A mobile home is considered a total loss after a fire broke out Tuesday afternoon.

The fire was reported at 3:23 p.m. on Clarice Lane in the Winchester area of Roseburg.

The fire was reported under in control within 20 minutes and no injuries were reported.  The American Red Cross was requested to assist one adult and several pets displaced by the fire.  Douglas County Fire District No. 2 responded to the incident with 13 firefighters including 3 engines and 1 command vehicle.  The cause of the fire is under investigation. 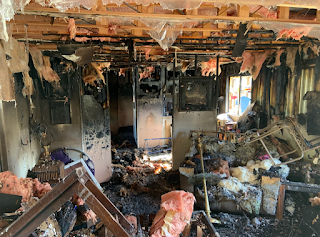