Portland Police Bureau A man was arrested on gun and drug charges after a traffic stop by members of the Gun Violence Reduction Team (GVRT). On Friday, November 15, 2019 at about 5:30 p.m., two officers with GVRT conducted a traffic stop in the 10300 block of North Vancouver Way. During the stop, the officers found the driver had an illegally possessed 9mm semi-automatic handgun under his seat. The driver was arrested and a search of the car revealed over 51 grams of methamphetamine (photo). Raymon A. Nath, 34 (photo), of Portland, was booked into the Multnomah County Detention Center on charges of Felon in Possession of a Firearm, Unlawful Possession of a Firearm, Possession of a Loaded Firearm (city code), and Delivery of Methamphetamine. The Gun Violence Reduction Team is continuing to investigate several incidents of gun violence citywide. Anyone with information about gun crimes in the City of Portland is encouraged to provide information to the Portland Police Bureau&
Post a Comment
Read more 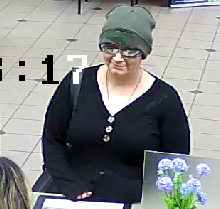 FBI - Oregon The FBI is featuring the October 21, 2019, robbery at the Oregon Community Credit Union in Eugene on its Unknown Bank Robbers webpage in an effort to generate more tips to help identify the woman responsible. The FBI and the Eugene Police Department are working this case jointly. At about 4:40 on that Monday afternoon, the woman walked into the branch, located at 2880 Chad Drive in Eugene, and demanded cash. Once she received an undisclosed amount of cash, she exited the bank and may have left the area in a silver pick-up truck, possibly a later-model Dodge 1500, double-cab. Description: White woman Age:  Mid 30’s Height: Approximately 5’6” Build:  Heavy with a round face and cleft chin Hair: Possibly bleach blonde Other: Pierced ears and may wear glasses Clothing: Black or dark grey v-neck long-sleeved shirt or sweater with 3 buttons at the top; black pants with light-colored flowers or circles; dark black and tan shoes; black purse with silver
Post a Comment
Read more