Redmond, OR – On Saturday, August 4, at approximately 5:30 PM, Redmond Police Officers were informed of a traffic complaint driving north from Bend.  The reporting person was an off-duty Bend Police Officer driving their own vehicle.  The off-duty Officer provided updates to Deschutes County 911 Dispatch as the vehicle continued driving north, first on Hwy 97, then on SW 61st Street and SW Canal Blvd south of Redmond.  Redmond Police, Deschutes County Sheriff’s Deputies, and Oregon State Police Troopers responded to the area.

Information provided to Dispatch indicated the vehicle was speeding more than 80 miles per hour, and crossing into oncoming traffic.  After entering the Redmond city limits and passing Ridgeview High School, the vehicle veered off the roadway near South Heights Ave and SW Canal Blvd.  The vehicle rolled several times, coming to rest on a frontage road which runs parallel to SW Canal Blvd, near to several houses.

The vehicle, a gray 2017 Toyota Tacoma, was occupied with two people when it crashed.  Both individuals were evaluated by medics on the scene and denied transport to the hospital.

This incident is one of six DUII arrests made by Redmond Police during the five days of the Deschutes County Fair.  Fair Week in Redmond is a busy time for businesses, families, and law enforcement.  Poor decisions by individuals can put the life-safety of many others at risk.  Please do not drive after becoming impaired on alcohol, marijuana, or any other substance.  Impaired drivers are killing other people every day!  Please call your local law enforcement agency, or 800-24 DRUNK in Oregon, to report suspected DUII drivers. 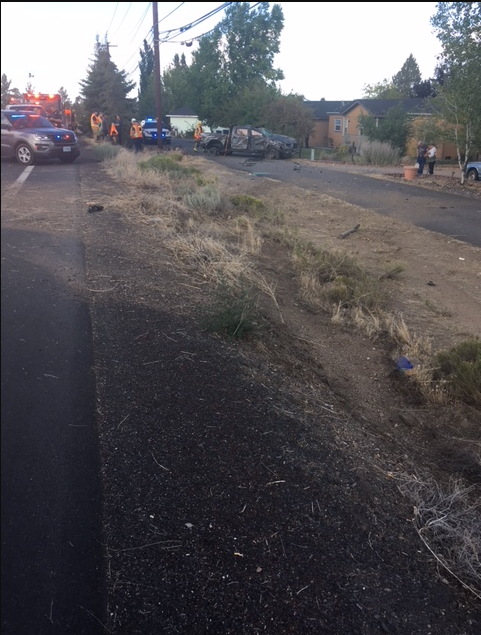