On 4/03/2020, at approximately 3:55 pm deputies with the Deschutes County Sheriff’s Office responded to a reported home invasion robbery in the area of the 15000 block of Burgess Road in La Pine. The caller reported that a masked male entered the residence with an unknown caliber handgun and threatened the occupants before stealing an item of clothing and fleeing the scene. Deputies arrived within minutes of the original 911 call and learned that the masked male threatened the occupants in the residence with the firearm and forced everyone to the ground before entering a back bedroom. The gunman was confronted by another male resident and a brief struggle ensued while the male resident tried to access his own firearm for defense. During this altercation the male gunman fled the scene on foot before entering the back seat of a waiting getaway vehicle being driven by another person. The victim and resident received treatment, on scene, for minor injuries due to the altercation.

Through the investigation, Deputies identified Cesar Brandon Guthrie as the suspect, an individual known by the victim. Through various investigative techniques and with the help of the Deschutes County Sheriff’s Office Detective Division and City of Bend Police Department deputies were able to locate the getaway vehicle within the 1500 block of NE 9th Street in Bend. Deputies and Officers conducted surveillance at the residence and on the vehicle and were able to learn that Guthrie was currently at a residence located in the 400 block of SE Woodland Ave. in the City of Bend.  Additional surveillance and investigative tactics led to Guthrie’s arrest as he left the residence on foot at approximately 9:00 pm. He was taken into custody without incident and lodged at the Deschutes County Adult Jail on 1 count of Robbery in the First Degree, 1 count of Burglary in the First Degree, 4 counts of Unlawful Use of a Weapon, 1 count of Coercion, 4 counts of Menacing, and 1 count of Assault in the Fourth Degree.

The investigation is ongoing and investigators believe there is no further risk to the public regarding this incident at this time. 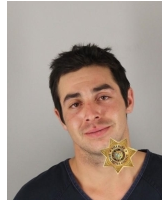