On 06/07/20 at approximately 11:56pm, Dispatch received a call for a collapsed male at the Best Way Inn which is located at 1253 NE 6th Street in Grants Pass.  When AMR personnel arrived, they located a man who was recently stabbed.  Grants Pass Police and Fire Rescue personnel immediately responded, rendered aid and secured the crime scene.  Prior to police and medical arrival, it was determined that two men left the room.  The male victim, later identified as Victor Barragan-Cruz (35) of Salem Oregon, was rushed to Three Rivers Medical Center where he was later pronounced deceased.

Grants Pass Major Crime Detectives responded and took over the investigation while Patrol officers began checking the area for the two outstanding men who fled from the room.  Both men were later detained and interviewed at length about the stabbing.

The investigation identified Esteban Perez-Hernandez (24) of Woodburn Oregon as the primary suspect.  Perez-Hernandez was lodged at the Josephine County Jail on the listed charges.

Furthermore, there is no additional threat to the public and a motive for the killing is still under investigation.

Per major crimes protocols, additional requests for information will need to be directed to the Josephine County District Attorney's Office.

Anyone who has information related to this case is asked to contact the Grants Pass Department of Public Safety at (541) 450-6260. 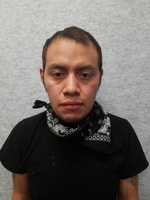