ROSEBURG, Ore. - A Myrtle Creek man was recognized by Sheriff Hanlin on Monday for actions he took in earlier this year at the scene of a vehicle crash in a small COVID compliant ceremony.

On February 19, 2020, at approximately 7:00 PM, Scott Pettibone was traveling in the 2500 block of Canyonville Riddle Road when he observed the glow of a small fire off the side of the road.  As he got closer, he realized the fire was the result of a vehicle which had caught fire after crashing head-on into a tree.

Pettibone stopped his vehicle to investigate and observed the shadow of a person inside the crashed car.  The driver of the crashed car was trapped in the vehicle and was pounding on the window screaming for help as the cab filled up with smoke.  Despite the engine compartment and a portion of the cab being on fire; Pettibone was able to get the driver's side door open, remove the victim and carry him to safety on the other side of the road. Pettibone then returned to the car to check for additional victims before calling 911 at which time the vehicle became fully engulfed in flames.

On Monday, December 21, 2020, Sheriff Hanlin presented Pettibone with the Sheriff's Citizen Medal of Valor for his actions.

"Scott Pettibone demonstrated, in great degree, the qualities of selflessness and personal courage on that day," Sheriff Hanlin remarked. "There are no doubts that the victim would have perished in the vehicle fire if it weren’t for the decisive actions of Mr. Pettibone".

Pettibone, age 49, received a medal and a pin for his actions. The Sheriff's Medal of Valor is is the most distinguished award presented to a civilian. 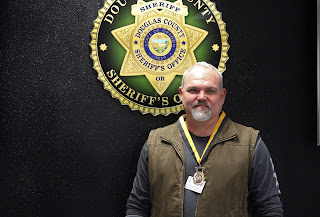