On 3/3/21 at 5:43 p.m., Deschutes County 911 received a report of an airplane crash into a field south of East Sun Ranch Drive, west of Camp Polk Road within the city of Sisters.   Deputies from the city of Sisters arrived at 5:45 p.m.

Deputies determined there were two occupants in the plane at the time of the crash.  The pilot, Madison Stieber, received non-life threatening injuries and was transported by private vehicle to St. Charles-Bend.  The passenger, Connor Schaab, received minor injuries and was evaluated by medics from the Sisters-Camp Sherman Rural Fire Protection District at the scene.  Schaab was not transported to the hospital.  Both Stieber and Schaab had self extricated from the plane, prior to the arrival of Deputies and medics.

The initial investigation determined Stieber was attempting to land at the Sisters Eagle Airport (15820 Barclay Drive in Sisters), when she made contact with the landing strip and then went airborne again.  The plane then flew to the southwest, over Camp Polk Road and struck the top of a tree, before striking the ground and coming to rest in a dry pond on private property in the 69000 block of Camp Polk Road.

The Federal Aviation Administration (FAA) and the National Transportation Safety Board (NTSB) were contacted and will be conducting a follow-up investigation regarding the crash. 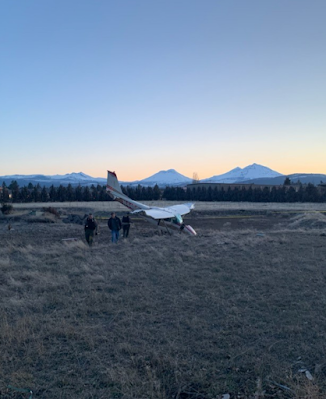