The Clackamas County Sheriff's Office is asking for the public's help to ID a motorcyclist/burglar dubbed the "Moto Bandit," as well as a woman seen with him the day before one of his crimes.

The Moto Bandit is believed to be involved in several late-night burglaries and attempted ATM break-ins at multiple restaurants and a pub in Clackamas County.

Photos of the Moto Bandit and his friend, and surveillance video of the suspect in action, are available here.

The Moto Bandit been caught on video patronizing at least one victim establishment beforehand. The Moto Bandit then breaks open a window or glass door at each victim business in the early morning. On two occasions after entering through that broken window, he makes failed attempts to break into ATM machines using an angle grinder before fleeing the scene on a Harley Street Glide motorcycle.

Surveillance footage of the two suspects was obtained by working with the victimized businesses.

FOUR CASES WITH A COMMON M.O.

On Sunday, April 4, 2021, the Moto Bandit struck around 2 a.m. at the Philadelphia's Steaks & Hoagies (18625 Willamette Drive, West Linn). The Moto Bandit (wearing a distinctive bucket-style helmet) rode a black 2017 Harley-Davidson Street Glide motorcycle to the location, removed two electric meters from outside the business in an attempt to disable its security systems, and left. He then returned at 4 a.m., smashed in the front door of the sandwich restaurant with a hammer. He was captured by a surveillance camera leaving the area around 4:24 a.m. on his motorcycle. It appears the morning bread delivery truck driver arrived at the restaurant, dissuading the Moto Bandit from entering the business to finish the job.

After reviewing surveillance footage and interviewing the business owner, authorities believe the Moto Bandit was at the restaurant around 6:30 p.m. the previous evening (Saturday, April 3). A female acquaintance rode to the location on the back of the suspect's motorcycle. As seen in the video, the Moto Bandit changed shirts and entered the business, checking windows and doors before leaving the business with the woman. Photos of the two are here.

The Elmer's is 6.8 miles away from the previous burglary location -- about 11 minutes' drive.

In this case, the Moto Bandit -- wearing heavy clothing, a face covering, and the same distinctive helmet worn during the Philadelphia's burglary -- arrived at the Elmer's on the same motorcycle and entered the restaurant by breaking open a lounge window. The suspect then used an angle grinder (a small electric saw) to cut open an ATM inside the restaurant before leaving the scene. He failed to secure any cash from the ATM.

As seen in the surveillance video, the suspect arrived at the pub at the pub at 2:47 a.m. on his motorcycle, then broke in through a window, causing $800 in damage. He then entered the restaurant and again used an angle grinder to cut into the side of an ATM in a failed attempt to get into the cash box, causing an additional estimated $200 in damage to the machine.

As seen in the video, after an alarm sounds, the Moto Bandit flees the pub before he can extract any cash from the ATM.

The suspect was once again wearing a bucket-style helmet, as well as goggles, a black face mask, a leather vest, a black hooded sweatshirt, gloves, and light blue jeans.

(initial investigation indicates this is likely related to the Moto Bandit)

A Clackamas County deputy responding to a late-night alarm at the restaurant, saw a Harley style motorcycle fleeing the parking lot at a high rate of speed.

The deputy was familiar with the previous burglaries and the suspect description.  Believing this was the Moto Bandit, he gave chase.  The chase went north on I-205 from 82nd Drive.  The deputy was able to see there was a female passenger on the motorcycle and stopped pursuing out of caution for her safety.

The initial investigation has revealed the suspect in this case matches the same description as the Moto Bandit.  The male suspect entered the location and utilized an angle grinder and attempted to cut into the ATM causing extensive damage to the machine.

Detectives are assisting Patrol deputies in this brazen crime spree.

The male suspect is described as a white male, 30-42 years old, standing 5'10" to 6 feet tall and weighing 185-240 lbs., with brown hair. During the commission of his crimes he has been seen wearing blue jeans, a heavy red flannel shirt or jacket under a black leather vest with two zippers on the front, and his distinctive bucket-style helmet. During the commission of his crimes he also wears goggles. He may also be in possession of a small angle grinder. He rides a black 2017 Harley-Davidson Street Glide motorcycle. A North Face backpack may be secured to the back of the motorcycle with red bungee netting.

The friend seen with the Moto Bandit on April 3 is described as a white female in her 20s or 30s with light brown hair.

Photos of the suspect and friend are here. 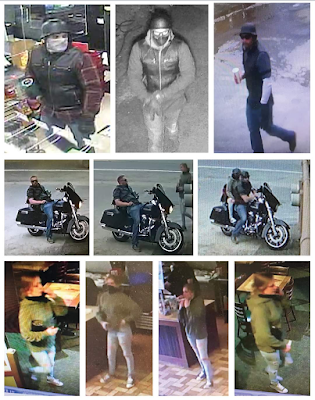 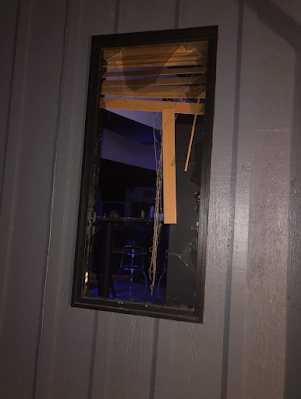 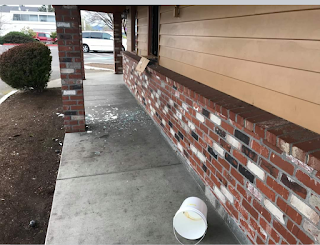 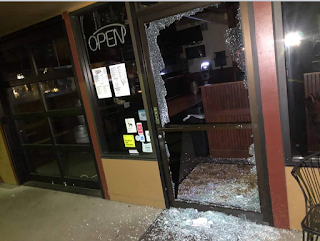 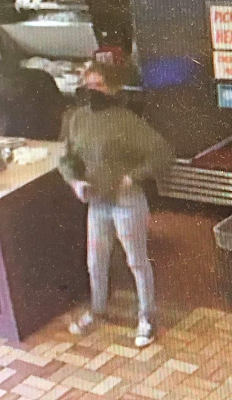 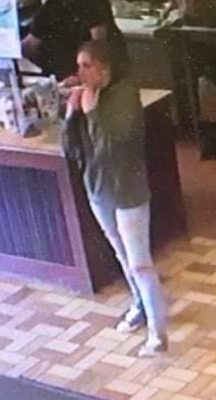 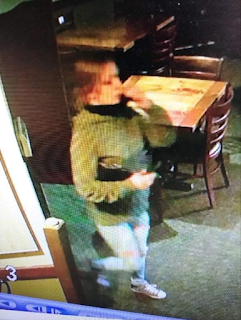 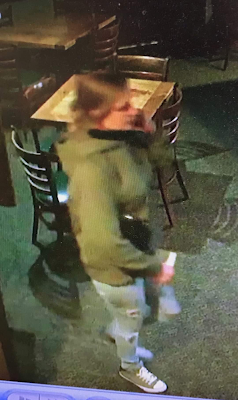 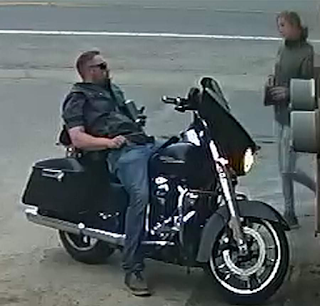 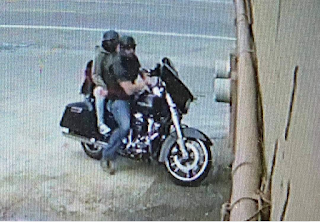 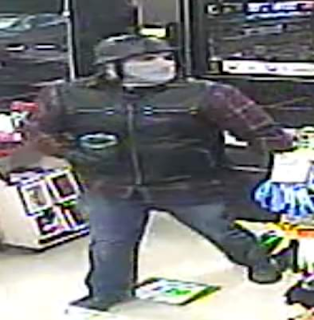 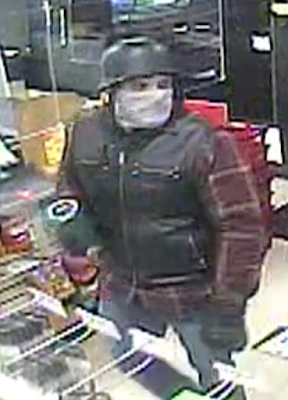 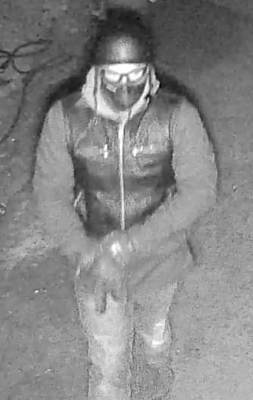 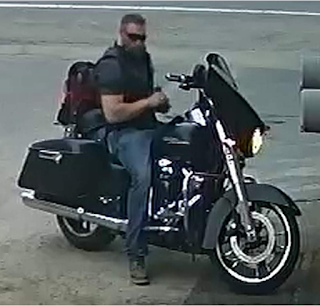 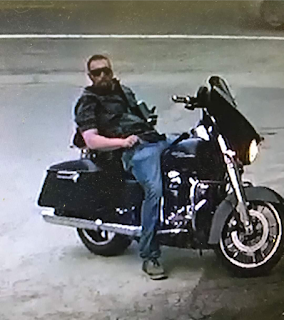 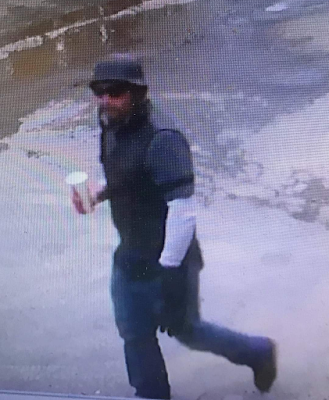 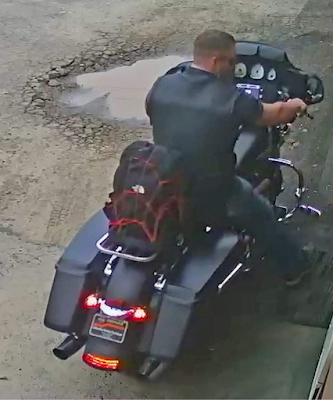