Inmate Walks Away From Work Crew

On April 28, 2018 at 3:20pm a Multnomah County Sheriff's Office Work Crew was working near SW 12th Avenue and SW Morrison Street in downtown Portland.  At that time, the work crew deputy supervising the group notified dispatch that inmate JOSHUA SEAN PURDUE had walked away.
Law Enforcement personnel from the Portland Police Bureau and Multnomah County Sheriff's Office were called to the scene to begin searching for PURDUE while the remainder of the inmates were secured.
PURDUE remains at large at this time.  PURDUE is described as a white male, 34 years of age, 5’10” tall and weighs 180 pounds.  He has brown hair and blue eyes.
PURDUE was due to be released from custody in early July of 2018, and was serving a 90-day sentence for a Burglary conviction.
If you see PURDUE, call 911 immediately and do not approach him.  If you have information about the whereabouts of PURDUE, contact the Multnomah County Sheriff's Office Law Enforcement Records Unit at 503-988-7300 to leave your tip. 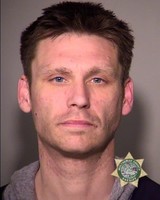