REDMOND, OR – On Saturday, October 13, 2018, at about 11:10 p.m., Redmond Police Officers observed a vehicle driving recklessly near the intersection of SW Pumice Ave and SW Canal Blvd. This section of SW Canal Blvd is closed, part of the SW Canal Blvd reconstruction project. Officers observed the vehicle strike a telephone pole and a parked water truck.  Additionally, the vehicle was operating dangerously close to a group of juvenile pedestrians that were also in the area. Officers walked into the area on foot as access to the road is heavily barricaded and attempted to contact the driver, who immediately sped off. The vehicle, a 2006 Dodge pickup truck was found a few minutes later crashed into the COID canal near the intersection of SW Reindeer Ave and SW Canal Blvd. The outside temperature at the time of the crash was below freezing, and the canal is currently filled with water.

Officers approached the vehicle and discovered the driver was still trying to drive despite the vehicle being partially submerged in the frigid water. Redmond Fire & Rescue personnel responded to the scene and conducted a water rescue to remove the driver safely.  The driver was identified as Anthony Castaneda, 34-years-old, and a Redmond resident.  Castaneda was evaluated by medics on scene and was then taken into custody by Redmond Officers. Castaneda was lodged at the Deschutes County Jail on charges of DUII-Alcohol, Recklessly Endangering Another Person, Reckless Driving, and Criminal Mischief.

It took several hours and multiple resources to safely remove the pickup from the canal.  The Oregon Department of Environmental Quality is aware of this incident and is investigating to determine how much pollutants may have entered the water.  COID staff also responded to scene to oversee removal of the vehicle from their property.

The Redmond Police Department would like to applaud the efforts of Redmond Fire & Rescue personnel in making sure Castaneda did not become hurt, injured, or killed given the weather conditions and danger associated with the vehicle crashing into the waterway.

Your Redmond Police Department keeps you safe with 45 sworn officers and 11 support staff who field more than 23,000 calls for service annually.  To date in 2018, the police department has responded to over 550 reported motor vehicle crashes. 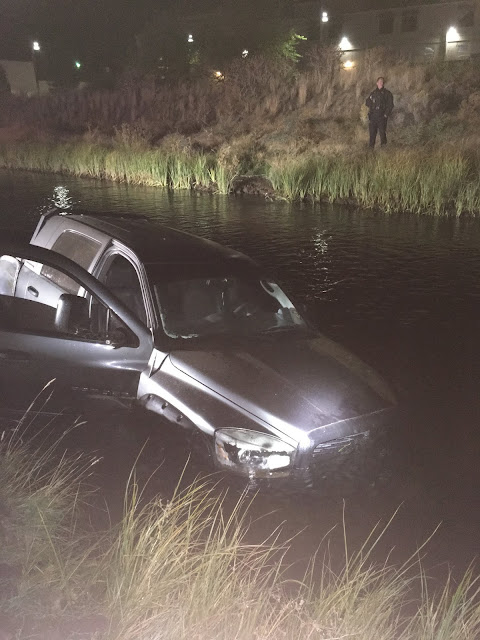