A Portland man was arrested after being confronted by a construction crew returning from an overnight snow removal project and interrupting a theft in progress. Additional stolen vehicles from the same area are still outstanding.

On March 2, 2019 at approximately 5:48AM, Deschutes County Sheriff’s Office Deputies were dispatched to a vehicle theft in progress. The 911 caller, an employee of Robinson-Owen Heavy Construction Company, reported that he interrupted the theft of a company construction trailer as he and his crew returned from an overnight project.

Deschutes County Sheriff’s Office Deputies and a Black Butte Ranch Police Officer arrived to find Robert Stanley Hornby II of Portland, Oregon being detained by the construction crew. Hornby was attempting to drive away with a flat-bed car hauler trailer when stopped by the crew who blocked him in with a construction grader.

The truck driven by Hornby while attempting to steal a trailer was also reported stolen by Fox Roofing in Vancouver, Washington.

During the investigation, it was discovered that Robinson-Owen Construction also had a blue 2016 Ford F350 with brushed aluminum rack stolen (Oregon Lic. 306JLC) from the same equipment yard overnight. That truck is still outstanding.

A rifle, stolen from the outstanding Ford truck, was in Hornby’s possession when he was arrested. He was also in possession of collection of “automotive jiggler or try-out keys.” These are tools often used by professional locksmiths. The “jiggler” key slips into the keyway of many locks and most car locks and moved around until the lock opens.

A second vehicle was also stolen overnight in the City of Sisters. In that case, a red 2002 Chevrolet Blazer (Oregon Lic 200GPY), was stolen from the 400 block of W Washington Ave. That car also remains outstanding.

Based on the initial investigation, Deputies believe all of the thefts are related and the investigation is ongoing. Deputies are following-up on additional leads and more information may be released as the case progresses.

Citizens are asked to contact Deschutes County 911 if either of the outstanding stolen vehicles are seen. Do not attempt to contact or detain the occupants.

Mr. Hornby was lodged in the Deschutes County Jail with the following charges: 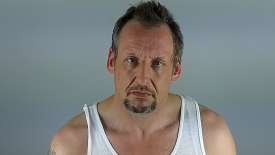