On Friday November 22, 2019, Rawland Strong, 32, a registered sex offender, was put on three years of formal probation for taking up-skirt images of two children after he enticed them with free frozen yogurt from the grocery store he was working at.

“This was obviously very concerning behavior. It was a traumatic incident for the two victims,” said Multnomah County Deputy District Attorney BJ Park, who prosecuted this case. “Mr. Strong could have faced much more serious charges had he successfully taken nude images of these children. This sentence is appropriate because it keeps Mr. Strong on supervision for an extended period of time and ensures that he receives specific treatment so this behavior never happens again.”

The victims and their parents were continuously updated throughout the progression of this case and are in support of this resolution, which protects the victims from having to be pulled out of school for a trial and testify about this incident. Furthermore, the victims’ families expressed a stronger desire for Strong to receive treatment over incarceration.

If the court finds Strong in violation of his probation, at any point during the next three years, he could receive additional sanctions, including up to 364 days in jail.

This investigation started on April 8, 2017 when Portland Police received information about a suspicious circumstance involving two minors and an adult male in the 4100 block of Northeast Fremont Street.

During the investigation, law enforcement learned that Strong was working at the market when the two victims entered the store to get some frozen yogurt.

Law enforcement reviewed surveillance video, which showed Strong offering the victims free frozen yogurt if they would allow him to take pictures of their feet. The victims agreed.

Strong led the girls outside to an area next to the store and had each sit on the ground and raise their feet while he took photos of them with his phone.

Strong then had both girls sit next to each other. He instructed them to raise their feet higher while he crouched down in order to take more photos.

“She was at the market for approximately 15 minutes that afternoon and in that time you identified and coerced her into posing with her feet in the air with legs spread so you could take photos under the premise you were taking funny photos for the market blog,” the mother of one of the victim’s said in an impact statement read by the District Attorney’s Office during sentencing.
After taking the photos, Strong walked away.

As the victims – who are friends – were walking home, they felt strange about the incident and reported it to their mothers. The mothers reported the incident to manager of the market. In response, the manager terminated Strong’s employment and called the police.

Police opened an investigation, but could not locate Strong. On April 4, 2019, law enforcement located Strong in the 4000 block of Northeast Fremont Street and took him into custody.

While on probation, Strong will not be allowed to be in contact with minors and will need to undergo a mental health evaluation and comply with any treatment that is ordered. 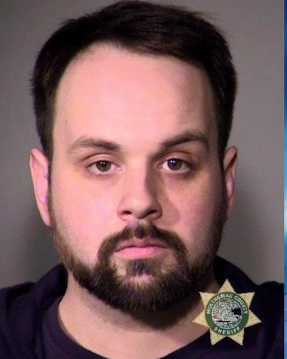