Suspect In Drug Case Attempts to Elude and Crashes

On January 24th, 2020 at approximately 1730 hours members of the Medford Area Drug & Gang Enforcement Team with the assistance of Jackson County Sheriff’s Office deputies were following a suspect driving a blue Subaru Impreza travelling on Highway 140 at Brownsboro Highway. The suspect was involved in an ongoing drug investigation. The suspect vehicle was pre-emptively spiked at Highway 140 and Brownsboro. It immediately drove off at high speeds despite the successful spiking of the tire. A second successful spike occurred shortly thereafter. Another system called Star Chase was attempted to be deployed to be able to track the suspect with GPS but was unsuccessful.

The suspect drove with tires deflated on rims at high speeds westbound on Brownsboro Highway. As he entered Eagle Point city the pursuit was terminated by JCSO for safety but the suspect continued through Eagle Point. Later the suspect was seen on Highway 62 heading toward White City. A deputy then tried to stop the car again. The suspect drove southbound on Highway 62 in the northbound lanes with lights off. The deputy terminated the pursuit again as the suspect continued toward White City.

At Highway 62 near Antelope the suspect crashed head on into a vehicle travelling in the northbound lane. The crash involved three vehicles plus the suspect vehicle. Multiple persons were given medical aid. Further details will be available later on those injured.

The suspect was arrested as he tried to exit his vehicle and flee.

Guyette was lodged at Jackson County Jail on a State Parole Violation Warrant for an original charge of Assault 3, No Bail. He also was lodged for Attempting to Elude a Police Officer-Vehicle, $7500 bail. It is expected that additional charges will be added by JCSO for the crash and related actions. MADGE investigators will possibly have additional charges also. 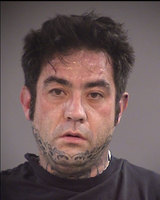