Lebanon firefighters responded to a camper fire off Mt Hope drive today at approximately 1600. Crews arrived to a fully involved camper fire with no immediate exposures. Crews quickly brought the fire under control. Residents living near the incident advised that the camper was not in use and no injuries were reported. One truck and command vehicle responded from Lebanon and two water tenders and an engine responded from volunteer substations. A total of seven firefighters arrived on scene. 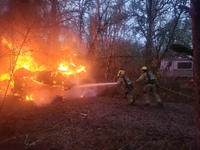