On November 29, 2020, at approximately 9:49pm, a deputy with the Deschutes County Sheriff’s Office was patrolling in the area of Sunrise Blvd. and Rainbow Drive, west of La Pine.  The deputy observed a gray Subaru WRX driving on Rainbow Drive at a high rate of speed for the area.  The deputy then observed the Subaru turn off its lights in an attempt to avoid detection.  The deputy alerted another deputy also in the area, who observed the Subaru pull out onto Sunrise Blvd. in front of him.  The second deputy attempted to stop the Subaru, which was still driving without any lighting.  The driver of the Subaru failed to stop and attempted to elude the deputy southbound on Sunrise Blvd. at speeds estimated near 40 MPH.

As the Subaru entered an icy curve in the roadway near the intersection of Sunrise Blvd. and Pinetree Drive, it left the roadway and struck a tree.  Deputies conducted a high risk stop on the vehicle and subsequently took James W. Bruce Jr. of La Pine into custody.

During a search of Bruce Jr., evidence was recovered that led deputies to suspect he may have a firearm hidden on him.  When they attempted to search him further, he resisted their efforts and he had to be further restrained to facilitate the search.  Although a firearm was not found on him, additional evidence was located inside the Subaru leading deputies to suspect a firearm.  DCSO K9 Ezel and his partner Deputy Jeremiah Johnson conducted an article search in the immediate vicinity of the Subaru.  K9 Ezel located a small caliber pistol in the snow near the Subaru that matched evidence located both on Bruce and in the vehicle.  Additionally, over ten grams of methamphetamine and evidence of manufacture and delivery of methamphetamine were recovered at the scene.

Bruce Jr. was evaluated at the scene by La Pine Fire medics and then a deputy transported him to St. Charles Hospital in Bend for treatment of a minor injury sustained in the crash.  He was then taken to the Deschutes County Sheriff’s Office Jail, where he was booked on the listed charges. 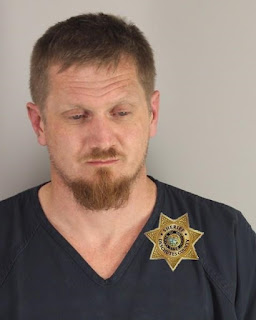 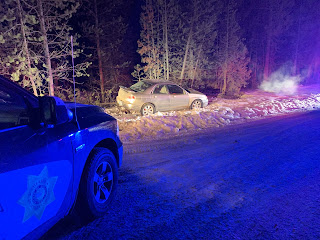