On 12/23/2018 at approximately 1916 hrs, deputies with Deschutes County were dispatched to a report of motor vehicle crash at Highway 20 and Old Bend Redmond.  Initial reports were that the crash was a high mechanism crash with unknown injuries.

Old Bend Redmond is controlled by a stop sign at this location.  Highway 20 traffic has right of way through the area.

Kirkpatrick was transported to St. Charles Medical Center with non-life-threatening injuries.  Highway 20 traffic was restricted to one lane in each direction for approximately 45 minutes.  Both vehicles were towed from the scene. 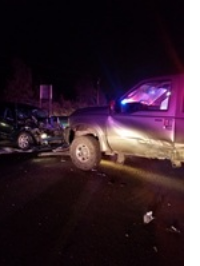