On Wednesday, January 23, 2019 at approximately 6:53 pm, OSP Troopers and First Responders were dispatched to the report of a two vehicle crash on Interstate 5 Northbound near milepost 136.
Preliminary investigation revealed that a white Ford pickup operated by Jelacio CARRASCO VARGAS, age 59, from Keizer, was reported by witnesses to have stopped in the northbound right travel lane and began backing up.  A white Volvo semi-truck and trailer operated by Xueyou CHEN, age 60, from San Gabriel, CA was also northbound and crashed into the back of the pickup as it was backing up on the Interstate.  The pickup came to rest on the shoulder where witnesses pulled CARRASCO VARGAS and his passenger Ernesto RODRIGUEZ VARGAS, age 29, from unknown city and state, out of the pickup as it caught fire.

CARRASCO VARGAS died from his injuries at the scene of the crash.  RODRIGUEZ VARGAS was initially transported to Mercy Medical Center for serious injuries and was later transferred to Sacred Heart Medical Center at RiverBend.  CHEN did not receive any injuries.

Alcohol use is being investigated as a possible contributing factor by investigators.

Traffic was reduced to one lane and the off ramp at exit 136 was closed for about four (4) hours while Troopers investigated the scene. 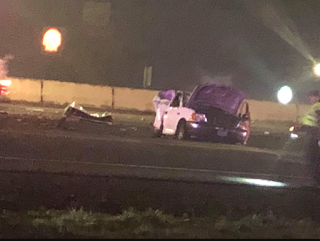