On Saturday, February 16, 2019 at approximately 0654 hrs. 911 dispatch received a call from a third party reporting that they had just witnessed an unknown suspect break into a parked vehicle, remove items from within, and then flee the area on foot.  Bend Police responded to the scene and conducted an extensive area check.  Although the suspect was not located at this time, a purse belonging to the victim was located along the roadway.

With the additional suspect description, Officers continued to search / canvas the area.  While doing so, a Bend Police Officer drove by a motorist who matched the description of the suspect in this case.  Bend Police contacted the driver of this vehicle on a traffic stop and identified him as Derek Chamberlain.

Based on evidence gathered during the investigation, Chamberlin was taken into custody without incident during the traffic stop and lodged at the Deschutes County Adult Jail on the below listed charges.  Property belonging to the victim in this case was recovered.
Charges: 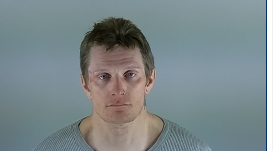