MYRTLE CREEK, Ore. - The Sheriff's Office is seeking information from the public regarding a missing Myrtle Creek man.

29 year-old Justin Grant Bibow last had contact with family and friends on Sunday, March 10, 2019. He was reported missing to the Sheriff's Office on Tuesday, March 12th at 3:40 PM.

Deputies have been investigating the report and have entered Bibow into a nationwide database as missing. Attempts to locate Bibow have been unsuccessful. Deputies have learned that prior to being reported as a missing person, a Salem Police Officer (Oregon) conducted a computerized records check on Bibow on Monday, March 11, 2019 at 2:27 AM. Bibow could possibly still be in the Salem, Oregon area.

Bibow is described as 5'10'' 320 lbs with hazel eyes and brown hair. He is associated with a white 2016 Dodge Ram Cummins pickup with Oregon license plate 850JTM. 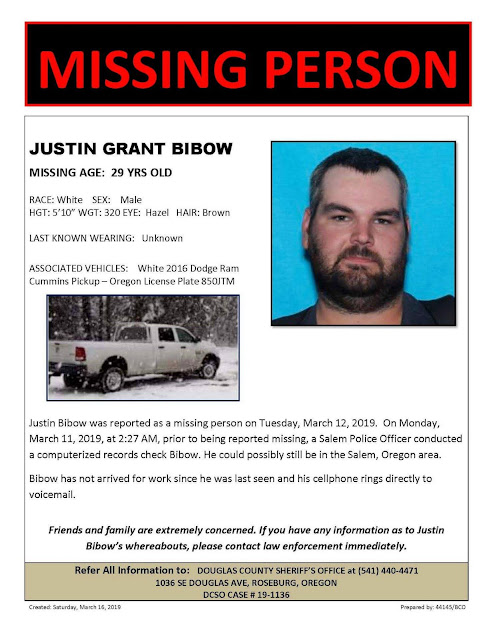